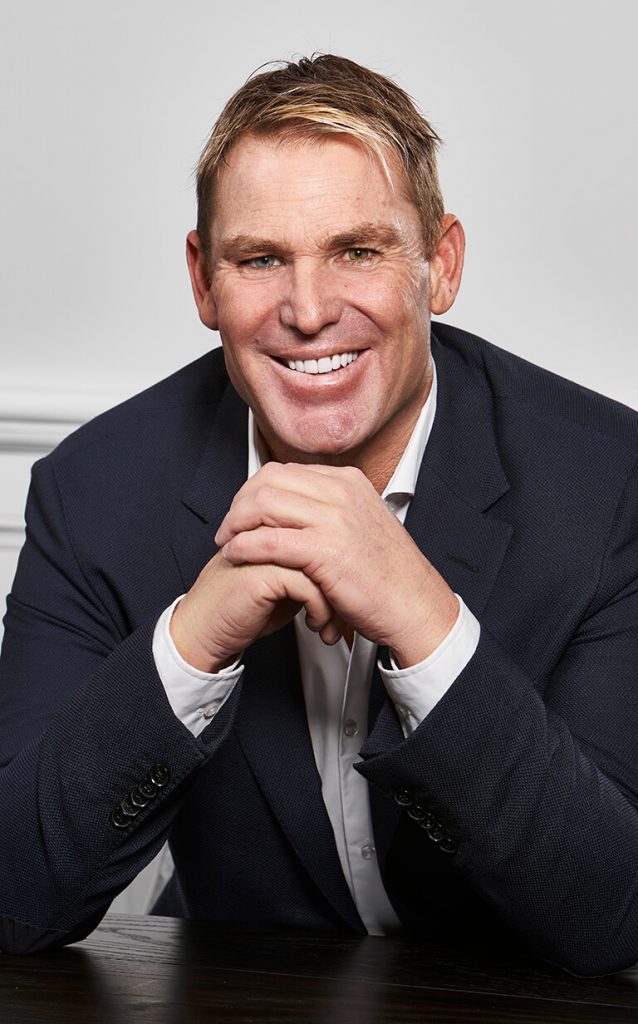 Shane Keith Warne is a cricketer of superb intellect, admired by Australians, and cricket lovers everywhere, for his unsurpassed skill and honest, perceptive and fearless views.

Shane’s journey began in the 1990-91 Australian cricket season, when the young boy from the Melbourne suburb of Black Rock packed his cricket gear, jumped in his souped-up Cortina and headed for the Australian Institute of Sport’s Cricket Academy in Canberra.

When he started, close cricket watchers would call him promising, but were more likely to notice the spikey blond hair, the diamond ear-ring, the sharp clothes, the reflecting sunnies – and the smoke pursed between his lips.

And, right from the beginning, the sparkling green eyes and glittery grin that could disarm anybody.

When he debuted for Australia, against India at the Sydney Cricket Ground in February, 1992, Ravi Shastri and a young bloke named Tendulkar showed him that Test cricket wasn’t child’s play with a dazzling 196-run partnership. Warnie claimed Shastri as his first Test wicket, but only after the Indian champ had passed 200 (Tendulkar finished unbeaten on 148, a sign of things to come). Shane finished that innings with the unflattering figures of 1/150, but astute judges liked what they had seen.

The whole cricket world started to sit up and take notice later that year when he took three wickets without conceding a run to lead Australia to an unlikely victory over Sri Lanka in Colombo.

But it was his 7/52 against the West Indies in Melbourne in the Australian summer of 1992/3 that set alarm bells ringing in the ears of the world’s batsmen.

They reached a crescendo in 1993, on the Ashes tour of England, when, with his first delivery, Shane destroyed Mike Gatting, and his off stump, with “the ball of the century”.

The Sultan of Spin had arrived.

Warne would go on to be named as one of the five cricketers of the 20th Century by Wisden, the bible of world cricket.

And what company he was in: Sir Donald Bradman, Sir Garfield Sobers, Sir Jack Hobbs, and Sir Vivien Richards. The Boy from Black Rock may not have a Sir in front of his name, but he was the First Knight of Flight!

Even as Wisden genuflected, Warnie kept bringing world batsmen to their knees. Accolade after accolade, award after award, followed as he spun his way to cricket immortality.

A dab of swashbuckle, a big dollop of national pride, a smidgen of win at all costs, a dose of the original Aussie mateship DNA, all wrapped up in a bundle of talent, ability, flair and unsurpassed tactical cricket knowledge.

Shane Warne is the complete package.

What you see is what you get: a straight shooter, a loyal Australian, a cricketer of immense talent who has made himself a household name around the globe.

His influence is everywhere: in India, as the inaugural captain-coach of the Rajasthan Royals in the Indian Premier League; in the UK, where he captained Hampshire for four seasons; in Sri Lanka, where the Warne-Muralitheran Trophy is the prize in Test series between Australian and Sri Lanka; and in Pakistan, where his 7/29 was named as Wisden’s Test bowling performance of the year in 2002.

In the 1999 World Cup, won by Australia, Warne finished with the most wickets.

Against New Zealand in the 1999-2000 season, he took his 356th Test wicket, eclipsing the world record of his hero, Dennis Lillee.

The achievements, and honours, rolled on and on: BBC Sports Personality of the Year, his portrait displayed in the Long Room of the Marylebone Cricket Club at Lord’s, named in Australia’s Hall of Fame, biggest wicket-taker in a calendar year (96), Man of the Series, 2004 Test Team of the Year, up there with the greatest.

He could end careers. Some players couldn’t cope with an arsenal containing weapons like his deadly ‘flipper’.

Always a student of the game, he took the delivery invented 80 years ago by the great Clarrie Grimmet and made it a modern-day batsman-breaker.

The ‘flipper’ looked like a leg break, but was squeezed out the front of the hand, coming at the batsman like a spitting cobra.

When Warne landed it, the ball skidded on to the pads plumb in front, or rattled into the stumps like they were milk bottles at a country fair.

Warne was an established and recognised genius of his craft. He combined the guile of Grimmett, the aggression of Bill ‘Tiger’ O’Reilly and the tactical smarts of Richie Benaud, added his own magic and brought the match-winning Australian leg spin, one of the great sights of cricket, back from the dead.

When it was over, the stats alone told the story: 708 Test and 293 ODI wickets – and don’t forget the 3154 Test runs, the most by any player who never reached the ton, the 125 Test catches clasped by those powerful fingers.

But there’s much more.

Shane Warne’s knowledge of the game is second to none. He’s a talented broadcaster, his unique perspective adding to any cricket coverage.

He knows what the next move should be, understands the foibles of the pitch, the weather and the circumstances of the game.

His books, ‘Shane Warne: My Own Story’ and ‘Warne: The Official Illustrated Career’, were both highly successful ventures.

And, in 2004, he launched the Shane Warne Foundation, dedicating time and resources to help seriously ill and underprivileged children.

“I have met so many brave children trying to come to terms with their illness and fight it,” he said.

“Unfortunately, some can’t, and it’s heart-breaking to see these beautiful children struggling and how it affects them and their families.”

“I’m extremely grateful to have three wonderful children. I want to make a difference – I want more children to smile, beat their illnesses, and help their families live better lifes.”

Shane Warne is a national hero in Australia, on and off the cricket field. The smile is omnipresent and there is still always a twinkle in the eye.